As I’m thinking about my direction for this blog and writing what I know, I know I can write forever about exercise, nutrition, and relationships. And one of the most important relationships in my life is my relationship with Rex. People who know Rex will chuckle at this idea, because Rex is a dog. And despite how I often treat him and speak to him like he’s a human, I know that he is a dog. And I stand by my statement that my relationship with him is one of the most important in my life.

I met Rex when he was 3 1/2 months old and I knew immediately that I loved him. If you’ve ever seen a German Shepherd puppy, you get it. This floppy, goofy pup had me bending to the whims of his ginormous paws from day one. But I want to focus on Rex’s impact on the hard times over the past few years, because I truly believe in the healing powers of dogs and our relationships with them.

Rex has been by my side for all three of my husband’s extended bouts of travel for work, and his subsequent infidelities. When we first moved in together, P was away for three months of training. In our first year living together, he left three times for three weeks at a time. He would leave for what was planned as a 2 day trip and get "jumped" from one city to the next under he'd been gone for almost a month. We had moved to a new city where we had a few friends, but no incredibly close ones yet. Rex and I explored our new neighborhood, watched endless Netflix shows, and slept in the same bed (yes I know you sacrifice sleep quality by letting your dog sleep in your bed but he loves it so much that it’s worth it to me) so we were never alone. When I was discovering and processing P’s earlier transgressions, walking Rex gave me the space to breathe and think, along with the chance to call family and friends to talk through my feelings.

Earlier this year, P left for his first three weeks out on the same day that New York City shut down for Covid-19. I saw lots of memes and articles about people quarantining alone, but I never felt alone. I could easily stay six feet away from all other humans if I could snuggle my floofy boy every day. When I discovered the most recent infidelity, my first thoughts were, “Where will Rex and I go?”. Even though he was P’s dog first, we both agreed after the 2018 issues that Rex would stay with me if we ever split.

When I left to visit my mom and sister, driving out of NYC after not being behind the wheel of a vehicle for almost two years, Rex was in the backseat as my travel buddy. In the numerous times that I’ve simply broken down, collapsing on the floor when a hurtful memory or thought becomes too much to bear, Rex has been there. In the immediate aftermath of the most recent infidelity discovery, he stopped eating breakfast first thing in the morning, a clear indication that he'd taken on my anxiety and sadness. If I can't turn a corner for myself, I know I can to lighten the burden on this sweet dog's shoulders.

Rex makes me laugh every single day. He just has a funny face and his mannerisms are distinctly his. I could, and probably will, write endlessly about Rex but I had to start somewhere. With this first thank you note to the dog who has gotten me through it all. 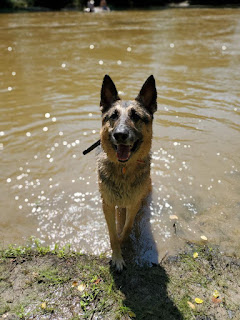