"You know what's great about New York? The threshold for citizenship as a New Yorker is actually pretty short. If you come to New York and you still like it two years after you arrived here, and you still think it's great and you're having a good time and you haven't been just totally ground down and go limping back to wherever the fuck you came from, you know what? You're in!" I posted this quote from the late, great Anthony Bourdain a little over two years ago when we signed the lease on our Brooklyn apartment. I was SO excited to move to New York and after ten rough days of apartment hunting, we found a place in a brownstone building, close to Prospect Park, and not too far from the gym we knew we would join. To say I was thrilled is an understatement.

Let's go back a little. While I was born in Alexandria, Virginia, I spent most of my childhood years in a REALLY small town. Like one stoplight small. I went to boarding school for high school in Alexandria, Virginia and the proximity to Washington DC was one of the biggest selling points. I stepped back from city life a bit by going to college and spending a few years after in the small city of Charlottesville, Virginia and went back to Alexandria when P and I moved in together in 2015. I love the DC area but I had spent my entire life in Virginia and was itching for something new. When we were relocated to New York for P's job, my little city-loving heart sang.

I'm not sure if my rural upbringing plays a role in this, but I'm one of those people who steps out of the airport in NYC and inhales deeply. I adore this city. I love walking around SoHo and the East Village; I love the sheer importance of the financial district; I love the history of Coney Island and Red Hook; I love the distinct neighborhoods and the rudeness of the residents and the food. Even the things I admittedly don't love - the subway, the slow-walking tourists, the ever-present garbage, and the prices of EVERYTHING - have been worth it for the experience of living in the epicenter of America. If something important happens, there's a very good chance it happened in New York City. It sounds so cliche, but there is just an energy here that is different from anywhere else. *cue the theme to Seinfeld, Friends, Will & Grace, Sex & The City, Saturday Night Live, take your pick*

The first year of living here was harder than I expected. I'll write a whole post on my career moves and missteps another time but living and working in New York is simply more tiring than it is elsewhere. Commuting takes longer and you will likely be crammed like actual sardines on a shitty subway car for at least one direction of your commute each day. I bike a lot and there is just no way to bike in the streets of Brooklyn without constantly being on the lookout for Ubers, buses, and car doors that could open at any second. There are a lot of homeless and mentally ill people out and about. This is not their fault and I hope that the safety net and systems to take care of the mentally ill will increase as soon as possible. And, in my past four subway rides alone, I've witnessed a physical assault, a screaming match between strangers, a masturbator, and a man asleep with his entire rear end exposed. Cortisol levels are just high constantly. (Driving in the DC / Baltimore / Northern Virginia area is no picnic either but the peacefulness and safety of one's own car is a game changer).

Despite all of this, if you had asked me a year ago, I would have said that you will have to pry me out of this city against my will. I loved it. And then COVID hit. I won't spend too much time on this but New York City was just a scary and changed place during the worst of the pandemic. I live one block from a hospital in Brooklyn and the sirens were constant. The mobile morgues were right in your face. People were simultaneously giving you mean looks if you brought your mask down while running in the park AND getting wayyyy too close when shopping for groceries. The aisles of my grocery store are maybe 3 feet wide? There is simply no way to walk past someone in the aisle while maintaining social distance. It doesn't exist. Things are getting better *cross fingers while thinking about the current rising number of cases and talks of the second wave* but it is not the same.

And then discovery day hit, and every bright spot from the relatively dark past six months was extinguished in minutes. Restaurants we'd ordered from, beach days at the Rockaways, cookies we'd driven to Manhattan to pick up. All tainted. In addition, pillars of my New York experience, like our gym, were knocked down. For the first time in almost two years, I wanted to be in a more familiar and less hostile cityscape. I wanted to be able to let Rex out to pee without putting a mask on and staying vigilant on the lookout for people walking and letting their toddlers wave a stick in the face of a 103-pound German Shepherd *insert eye roll here*. I wanted to go home.

So I rented a car and drove a car for the first time in almost two years. First from downtown Brooklyn to Park Slope. Then out of Brooklyn, over the Verrazano Bridge, and to Virginia. I spent five blissful days in Richmond with my family, restored a modicum of my soul, and drove back. I would be lying if I said I haven't thought about moving almost constantly for the past few weeks. But I'm here now and determined to make the best of it for the time being. I'm focusing on enjoying the beautiful fall days and crisp temperatures, spending *socially distanced* time with friends, and building a new relationship with my husband as we pass this two year milestone of city living. I have gotten mighty close to limping back but I'm still here, as a New Yorker. 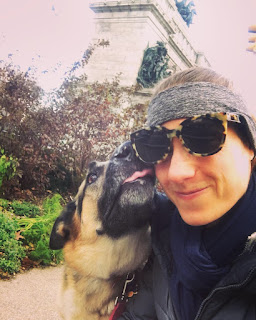