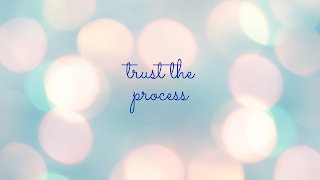 I put the title in quotations because this phrase has become so ubiquitous over the past few years that it has turned into an eye-roll inducing cliche. Cliches generally become cliches because they have truth in them, and I believe this one is no different. But when three words are used to instill confidence in everything from following a diet and exercise plan to withstanding the grueling grief of recovering from infidelity, I begin to question what they actually mean.

Breaking it down, the two words that have substance are "trust" and "process". To trust is to "believe in the reliability, truth, ability, or strength of". Merriam-Webster breaking a cardinal rule there of using a word it it's own definition. To trust in the... truth of something? Ok. It's a vague definition of a very important action. And process is "a series of actions or steps taken in order to achieve a particular end". That one I like better. I love a Standard Operating Procedure, a checklist, a right way. And I find the "particular end" part especially interesting. In order to trust the process, then, one must first identify the desired end result. But what if I'm not sure about that result?

I don't want everything to go "back" to the way it was. And I know that it can't. A broken bone can heal but will be forever changed. As I said, even if I could just erase the pain and go back to how we were before the most recent infidelity, I wouldn't. Infidelity is almost always a symptom of existing issues in a relationship and part of recovery is going back to examine those issues, communicate better, and hopefully keep them at bay moving forward. I think my biggest issue has become the notion of time and WHEN I will feel better, different, somewhat healed.

After our first marriage therapy session, we were tasked with writing a Vision for our Relationship. I won't share it here as I need and want to keep some things private but I think that's my guiding light for the particular end I want to achieve. It's written in the present tense and every action is ongoing. Identifying the "series of actions or steps" in order to get there is a little tricker. Therapy, journaling, writing here, and support from family and friends has already been incredibly valuable and will continue to be. I know I'm not doing it perfectly but I do feel a sense of progress on some days.

The trust part is the hardest. How do I trust a process with a person I do not inherently trust yet? How do I trust myself when I've let myself down constantly for the past few years? I tend towards logic and pessimism (prepare for the worst!) as opposed to faith and optimism. The data for trust is simply not there. I've been thinking a lot this week about how I'm finally beginning to believe everyone who said that making the choice to stay in a marriage after infidelity is the harder and stronger choice. Admittedly, I thought people were saying that to be nice and were probably secretly thinking that I was an idiot or too scared to leave and start over. And I'm not saying that wouldn't be hard. But this examination of myself and my relationship every single day for almost two months has been excruciating already and sometimes the idea of just running away seems like the much easier option.

I'm not sure if I trust the process yet. But I have hope. And support. And some tools. I have our Vision for our Relationship. I hope I can read this in a few months or a year, maybe even years from now, and marvel at how far I've come. I want to make another cliche joke here about enjoying the journey rather than seeking the destination. But this journey kind of sucks and here's hoping the destination is worth it.